Download the Sinkholes – Plant City, Florida, January 2010 KML file, modified from Tampa Bay Online. Blue markers were done by TBO, the red markers with the letters were done my me. I started adding more locations to their map, but then I found out that there were around 80 sinkholes reported and I decided to stop! I found the Florida Department of Environmental Protection’s Sinkhole Database which has tons of info about sinkhole locations, sizes etc, but it has not been updated since September of 2009.

Groundwater withdrawal doesn’t cause the formation of the cavities in the limestone, but it does contribute to their collapse, forming what we think of as sinkholes. When the buoyant forces from the groundwater are no longer present after the withdrawal of the groundwater through pumping, the soil cover over the cavity can collapse.

In the case of the Plant City sinkholes, the period around which they occurred was marked by some unusually cold weather as mentioned above. The figure below shows the temperatures in the first and second week of January dropped down to freezing or below for 11 days (1/3 to 1/13). 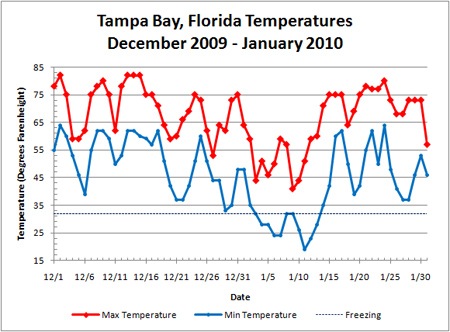 Of course when many people think of Florida, one of the things that comes to mind is oranges. And the Plant City area does appear to have it’s share of citrus groves based on Google Earth imagery, but it is the strawberry farms that dominate the agriculture in the area, and it’s definitely an important part of the Plant City economy. This year marks the 75th anniversary of the Florida Strawberry Festival held in Plant City. It is actually running right now through March 14.  So it’s understandable that the strawberry farmers would want to protect their crops.

One strategy to prevent damage to trees and crops in times of cold temperatures is to provide extra irrigation. I’m not sure what the goal is with the strawberries (ie. flood the fields or just keep the soil extra moist or something else), but I know if dry soil freezes, it can pull moisture from the roots damaging the plant or tree. So the growers and farmers in the area of Plant City pumped a billion gallons a day for 11 consecutive days to protect crops and actually lowered the groundwater table in the area by as much as 60-ft in some locations according to a spokeswoman for the Southwest Florida Water Management District.

Summary of Some of the Sinkhole News Stories 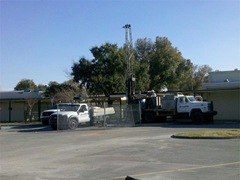 Most of what I’ve written here I’ve pieced together from news stories at Tampa Bay Online. Here are links to a few of them.