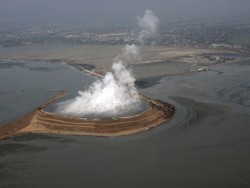 The truly unique Sidoarjo mud volcano in Indonesia has erupted continuously for 5 years now. More than 40,000 people have been displaced and 12 villages destroyed. The rate of erruption has ‘slowed’ to 10,000 cubic meters per day and is being contained by dikes.

A geologist with Durham University in Britain, Richard Davies, said in Surabaya the volcanoâ€™s pressure is diminishing. But there a possibility the pressure could slowly build and cause an even bigger eruption. He says the mud volcano is the most unpredictable in the world. â€œThe way it’s behaved is entirely unnatural, and it is in fact completely unique. It has erupted continuously, pretty much, for five years. That is unheard of in natural mud volcano systems,” he said.

I haven’t posted anything about the mud volcano in Indonesia, but it has been an interesting story and an ongoing one as well. It is usually referred to as the Java mud volcano, or perhaps […]

On May 29, 2006, the Sidoarjo mud volcano began erupting between 7,000 and 150,000 cubic meters of mud per day and it presently has no signs of stopping. A new report by scientists from Indonesia’s Institute of Technology Bandung and the UK University of Durham set to be published in the journal GSA Today confirms the early UN Report that an oil drilling rig was the cause of the disaster that has displaced an estimated 30,000 people. The report also indicates that the volcano, now named Lusi, could potentially collapse by as much as 146 meters (why not round that huh?). They say that the weight of the mud has already caused ground subsidence on the order of 14 meters near the center.

Images show the source of the mud flow, before and after. Acquired and processed by CRISP, National University of Singapore IKONOS image Â© CRISP 2004

Reuters story by way of Geology.com. See the University of Durham news release also. For a summary of the first year and the formation of the volcano, see my original post on the topic.

The Java mud volcano continues to erupt at the same pace as before, showing no signs of stopping. Indonesia’s national planning agency has put the economic damages at $334 million a month and says the final bill could be as high as $8.6 billion. There are a number of environmental impacts as well since the mud is contaminated with heavy metals, benzene and sulfur dioxide. More…