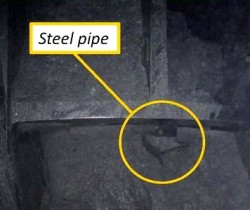 WSDOT held a press conference on Friday to discuss findings regarding the obstruction that had stalled the Bertha Tunnel Boring Machine since December 6. It is an 8 inch well casing, 119 feet deep from a 2002 groundwater investigation associated with the tunnel project. Crews were finally able to dewater the TBM face enough to get a look last week.

The interesting part is that the TBM struck the casing on December 3, three days before it stopped. The rotation of the cutterhead lifted the casing 5 to 7 feet out of the ground. Crews removed the upper 55 feet of casing and thought that was the end of it. There were fragments of boulder on the conveyor belt, and crews felt they were dealing with a large boulder problem. So what now? The WSDOT officials were not specific, but likely Seattle Tunnel Partners crews will need to perform an intervention outside of the cutter face to remove the pipe and inspect for any damage to the cutterhead. The cost of the issue will count against a $40 million risk allowance for repairs and inspections near the front of the rotary cutting face â€” plus a $105 million general contingency fund. The overall tunnel project budget is $2 billion.

Other News Stories on Bertha’s Blockage