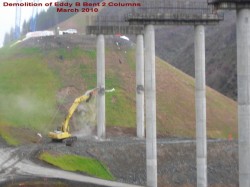 Is the Bingham Canyon copper mine landslide the most expensive single mass movement in history?

April 21, 2013 rockman Failures Comments Off on Is the Bingham Canyon copper mine landslide the most expensive single mass movement in history?

Dr. Dave has some financial analysis of the Bingham Canyon Mine Landslide in Utah. His interpretation of some of the financial data being thrown around is a financial loss of $770M, ouch! [Source: Read the […]

February 1, 2012 rockman Project Related Comments Off on US Wick Drain Drives It Home With The Largest Marine Wick Drain Job In The World