The Rick Marshall Commitment to Excellence in Safety Award is given only when deserved for members whose proactive commitment to providing a safe workplace is of superior quality, demonstrates a comprehensive and consistent safety program beginning at the highest level and filtering down through the entire company culture. The award was named in recognition of the special contribution made by ADSC Safety Committee Chairman, and in-house volunteer Safety Consultant, Rick Marshall. ADSC awards are presented to recognize outstanding achievement in combined field and shop safety efforts of ADSC Contractor and Associate Member companies.

"At DBM we are more than dedicated to safety, safety is an integral part of our company culture," said Tom Armour, DBM president and CEO. The company’s EMR rating has dropped 30 percent since 2009 and is currently .679. The company has not had a time loss accident in more than 450,000 man-hours worked.

In an August 2010 article in ADSC’s Foundation Drilling Magazine, Eric Loehr and Dan Brown of Dan Brown and Associates summarized the key findings from a report they authored on the use of micropiles in […]

Michael D. Moore will be the new CEO of the International Association of Drilled Shaft Contractors or ADSC as S. Scot Litke “retires” as Executive Director. More info from Dan Brown and Associates or directly […] 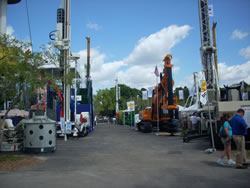 [Editor] Last week was the International Foundation Congress and Equipment Exposition in Orlando, Florida. The event was co-sponsored by the Geo-Institute, ADSC and PDCA. Perhaps at the next event I’ll be able to attend and provide some comprehesive coverage via GeoPrac. In the meantime, I am very appreciative of Robert Thompson of Dan Brown and Associates, PLLC. who was among the attendees (and a presenter?). He was kind enough to provide GeoPrac readers a summary of the event. Click through for more on this tremendous conference. (Photo by Robert Thompson, Dan Brown and Associates, Inc. ) [/Editor]