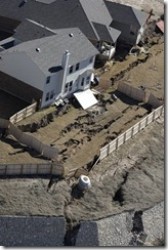 A federal judge ruled that the property owners can’t sue Pulte homes for the failure of a retaining wall and a subsequent slope movement (they refer to it as a landslide). The failure occurred in January of 2010 (see my original post on the retaining wall failure here) at Pulte home subdivisions called Rivermist and Hills of Rivermist located in Bexar County, Texas near San Antonio. A 20 to 30 foot high retaining wall failed in pretty spectacular fashion. Pulte argued successuflly that: "it is not a proper party because it was not involved in the construction of the homes, was not involved in the development of the subdivisions, and was not a party to the sales agreements that plaintiffs entered into with Centex." [Source: Courthouse News Service. Image: Jerry Lara – San Antonio Express-News]

ASFE: Fighting Back Against Expert Witnesses

November 16, 2007 rockman Standards and Codes Comments Off on ASFE: Fighting Back Against Expert Witnesses