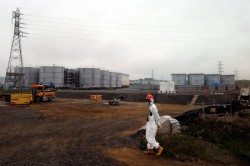 New leaks into the groundwater have been detected at the Fukushima Daiichi Nuclear Power Plant in Japan that experienced a triple meltdown in 2011 after an earthquake and Tsunami. The plant’s operator, Tepco, recently admitted that radiactive contaminated groundwater is leaking into the Pacific Ocean at a rate of 75,000 gallons per day. The groundwater gradient in the vicinity flows from the mountains to the Ocean, passing through the plant. The water has flooded reactor buildings and leaks within the facility then contaminate the water. Tepco has previously constructed some kind of underground barrier wall by injecting a chemical hardening agent into the ground. But the water built up behind the wall and eventually flowed over. The latest plan was announced by the Japanese government, which has stepped in to take a more active role after what many see as another example of Tepco’s mismanagement of the disaster. This plan involves using ground freezing to a depth of 100 feet to create a mile long ‘ice’ wall that will prevent the groundwater from entering the facility and becoming contaminated. [Source: Read more about this latest chapter in the nuclear disaster at NYTimes.com. Image: Toshifumi Kitamura via the NYT]

Finland has the world’s first commercial underground nuclear waste repository, and construction of the access works, infrastructure, and the first five disposal tunnels is essentially complete. I haven’t seen a timeline of when they will […]

This month there are a number of changes to standards relating to masonry units, bricks, dimension stone, etc. There are also some changes to a few standards related to asphalt paving, and groundwater testing. ASTM D6453 – Standard Guide for Format of Computerized Exchange of Soil and Rock Test Data was withdrawn. Read on for the full list.