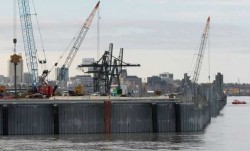 The U.S. Department of Transportation Inspector General released a scathing audit report on the troubled Port of Anchorage expansion project and the obscure federal agency that was supposed to be overseeing it, the Maritime Administration or MARAD. Among many problems, the original open-cell sheet-pile system was found to have significant design flaws making them vulnerable to earthquakes. The report described the agency’s lack of capability to manage a project of that size, its inability to audit it’s own numbers, a failure to verify cost figures for the over $1 billion project, and the fact that a Native corporation involved in the contracting was merely a ‘shell corporation’. [Source: Read more about the scathing audit report at ADN.com. Image: BILL ROTH â€” Anchorage Daily News]

On March 9, 2018 a “limited breach” of the tailings dam at the North Tailings Facility of the Cadia Mine tailings impoundment occurred in New South Wales, Australia.  The area of the failure is approximately […]