"The misrepresentation of the situation in Louisiana by TIME magazine is damaging to efforts to get essential, factual information to the people and community leaders of New Orleans," said Maj. Gen. Don T. Riley, Director of Civil Works for the Corps. "The article’s reckless disregard for the truth undermines the real science and risk information citizens need to make informed decisions about rebuilding."

At TIME’s request, the Corps spent a week providing the author with interviews and detailed engineering and scientific information about what we have learned and accomplished in the aftermath of Hurricane Katrina. The Corps also provided information about the ongoing and planned work the Corps and its partners are doing to restore and improve regional protection.

Much of the engineering and scientific information provided to TIME by the Corps was based on the work done by the independent Interagency Performance Evaluation Task Force (IPET). Lt. Gen. Carl A. Strock, then the Corps commander, commissioned the IPET to analyze the performance of the hurricane protection system during Hurricane Katrina. IPET comprised more than 150 national experts from eight government agencies, 25 universities and 23 private firms. Dr. Ed Link, IPET chair, was interviewed by TIME during the preparation of the article and provided information on the hurricane threat and reliability analysis.

The Corps also released on July 10 the draft Hurricane Protection Decision Chronology (HPDC) for the Lake Pontchartrain and Vicinity Hurricane Protection Project (LP&VHPP) in the Greater New Orleans area. The HPDC is an exhaustive examination of the 50-year record of LP&VHPP decision-making and project implementation involving the Corps, local sponsors, government at all levels, and the courts.

An independent study team of water resources planning and policy experts conducted the HPDC inquiry and prepared the report. The National Association of Flood and Stormwater Management Agencies externally reviewed the HPDC prior to its release.

The HPDC’s lessons learned about the complex decision processes and relationships between agencies, local sponsors and stakeholders are applicable to the development of large infrastructure projects nationwide. Key findings in the HPDC emphasize the importance of using systems approaches for public works infrastructure; adaptive management over the life of projects; the need to consider how decisions made today impact or are impacted by decisions made in the past; and the critical importance of understanding risk management and effectively communicating risk to the public and decision makers.

The HPDC also serves to emphasize the need for the Corps and other agencies to do a better job in providing critical risk information about the state of the national public works infrastructure to the nation’s decision makers that will enable them to make better-informed decisions about infrastructure priorities and funding.

TIME fails to include relevant Corps, IPET or HPDC information in the article that would give its readership the context needed to make informed decisions about the situation in southeast Louisiana. The article also does not include any of the findings of the objective national experts from the ASCE or the National Academies review panels. The article instead relies upon technical quotes that are not supported by science-based facts or the analysis done by IPET, ASCE or the National Academies.

Among the significant errors and misrepresentations in the article that need to be publicly corrected are the following:

"The most important thing to remember about the drowning of New Orleans is that it wasn’t a natural disaster" and "Katrina wasn’t even close to the Big One" – Hurricane Katrina was an extremely large and powerful storm ‘ the most severe storm in recorded history to hit the Gulf Coast from storm surge and wave generation perspectives. Katrina reached Category 5 strength in the Gulf of Mexico before decaying in intensity as it approached the coast. The hurricane created the highest storm surge to ever hit North America (28 feet) and tied the highest significant wave height ever recorded by a National Oceanic & Atmospheric Administration (NOAA) buoy in North America (55 feet in Alaska’s Aleutian Islands). Downplaying the severity of Katrina based solely on wind speed ("it was a Category 3 storm that missed New Orleans") does not equate to what has been learned in the last two years in hurricane modeling and the understanding of storms. Katrina overwhelmed many sections of the protection system, and had the floodwalls not breached up to one-half of the area would still have flooded from overtopping and rainfall alone.

The Category 1 – 5 hurricane scale – The Saffir-Simpson hurricane scale (e.g., Cat 1, Cat 3, Cat 5), developed in 1969, focuses on maximum wind speed as a measure of storm strength. It is valid and useful in respect to hurricanes as meteorological events, but is not adequate to describe the potential surge and wave generation capacity of hurricanes. Hurricane Camille hit Mississippi in 1969 as a Category 5 with 24 to 25 feet of surge while Katrina, a Category 3 storm at landfall, devastated the Mississippi coast with up to 28 feet of surge. Storm size, direction and speed of track, continental shelf complexity and topography, and other factors are important in determining storm surge, waves and damage. This knowledge will influence future project designs.

MRGO greatly intensified storm surge – An oft-repeated yet unsubstantiated statement, also included in the article, is that the Mississippi River Gulf Outlet channel intensified Hurricane Katrina’s storm surge in the metropolitan New Orleans area. The assertions in the TIME article that the MRGO’s presence increased the peak surge by 2 feet and velocities by tenfold around St. Bernard Parish and the Lower Ninth Ward are simply not true based upon the most advanced, sophisticated storm surge model and wave modeling available. IPET researchers found that the MRGO channel had very little, impact on amplifying storm surge (https://IPET.wes.army.mil, Volume IV ‘ The Storm Appendix 6). A separate study commissioned by the Louisiana Department of Natural Resources and performed by URS Corp. found basically the same thing. The Corps has recommended the closure of the MRGO, but the recommendation is based upon economic and environmental considerations, and not for any reason related to Hurricane Katrina.

Louisiana protection compared to Netherlands 10,000-year-storm protection – The Netherlands faces a very different threat (no hurricanes) and a very different environment than New Orleans. The difference between 1:100 and 1:10,000-year water levels in the North Sea against non-hurricane type storms is quite different than in New Orleans where the additional height of structures required to protect against a 1:10,000 chance of hurricane water levels and accompanying waves is impractical anywhere along the Gulf Coast. The Corps is working with experts from the Netherlands to benefit from their ideas and experience.

"100 yards of cypress trees can reduce wave energy 95%" and "We found that none of the levees that failed were protected by wetlands or trees" – These claims in the article are not substantiated by any rigorous scientific analysis or hard data. The post-Katrina photo below shows a buffer zone of trees (perhaps 50 yards wide) fronting a devastated levee in St. Bernard Parish (the pot holes show where the levee was). Clearly this buffer zone of trees in front of the levee did not prevent its failure due to storm surge and wave overtopping.

The Corps acknowledges that wetlands have a beneficial role in storm surge and wave dissipation, but adequate quantitative information about that role has not been developed. Experts are working with advanced models now, and initiating controlled field and laboratory investigations, to definitely show the value of wetlands. Additionally, cypress trees cannot tolerate the high salinity levels (saltwater) where waves and surge normally occur. Sustainable plant species that can withstand the constant pounding of hurricane winds and waves at elevated surge levels for extended periods of time must be used. We are currently designing experiments to evaluate native vegetation for this purpose.

"Levees sagged as much as 5 ft." – IPET studies found that due to elevation survey datum errors and subsidence that some levee areas were up to 2.5 feet lower than thought. From the IPET report (Volume II, Geodetic Vertical and Water Level Datums, available at https://IPET.wes.army.mil), the following are the maximum elevations below the design level that were physically measured ‘ Orleans Canal, 1.5 ft; London Ave. Canal ‘ 2 ft; 17th St. Canal ‘ 2.3 ft; IHNC ‘ 2.5 ft. Subsidence, or the gradual sinking of the area, has to be planned for and accommodated in all future projects. Any drop in design elevation is a problem, and IPET work supplied the new, accurate vertical datum for surveying future projects. Louisiana and Corps officials are using emerging science and engineering measures to address this in future projects.

"The truth of the situation in southeast Louisiana is very different than the TIME article would lead readers to believe," said Riley. "The Corps and our many federal, state, local, and private partners have made great progress in enabling the rebuilding of New Orleans, and IPET’s state-of-the-art risk modeling shows that the hurricane protection system is now more effective than it was pre-Katrina."

Riley added, "The Corps is committed to providing quality science and engineering, and to transparently communicating to the people of Louisiana about what coastal restoration and protection will, and will not, do for them in future storms. Our intent is for the public to know their risks and be able to make their own, well-informed decisions about where and how they want to live and work.

"We stand firmly behind our work in Louisiana, and we want the citizens of southeast Louisiana to know that the most advanced engineering and science available is being used as the Corps and its many partners move forward in providing hurricane and storm damage reduction for the region.

"TIME’s readership, the nation and the citizens of southeast Louisiana would have been much better served had "The Threatening Storm" been published as a more accurate, factual and balanced article.".

For additional Corps comments on the errors and misrepresentations in the TIME article; web links to the Interagency Performance Evaluation Task Force’s post-Katrina analysis and the Hurricane Protection Decision Chronology; and information about the work being done in southeast Louisiana, please visit www.usace.army.mil.

The effect of storm surge on foundations

January 23, 2013 rockman Failures Comments Off on The effect of storm surge on foundations

Super Storm Sandy was the most recent reminder of the dangers posed to building foundations by storm surge, waves, scour and erosion. The January 2013 issue of Civil Engineering Magazine by the ASCE has a […] 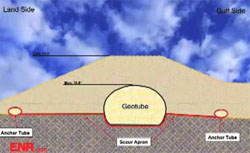