Sinkholes at the Dead Sea have threatened tourists and forced Israeli (and perhaps Jordanian)authorities to close various facilities and cancel development plans to avoid these geologic hazards. These are not your typical Karst sinkholes. According […] 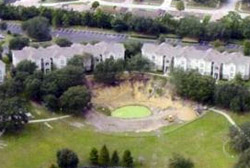 A sinkhole approximately 32 meters in diameter and roughly 200 meters deep opened up in the Atacama Desert of Chile, near the Alcaparrosa copper mine at the beginning of August 2022. Anytime something like this […]