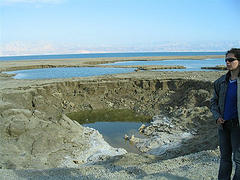 Sinkholes at the Dead Sea have threatened tourists and forced Israeli (and perhaps Jordanian)authorities to close various facilities and cancel development plans to avoid these geologic hazards. These are not your typical Karst sinkholes. According to a recent AP article, they are caused by the erosion of salt deposits by fresh water as a result of the lowering of the water level. This is a human caused phenomenon as current size of the Dead Sea is just 1/3 of its size in 1960 since water has been diverted from the Jordan River, its main tributary to be evaporated for its phosphates. At the end of the article is an interesting note that the World Bank is currently evaluating a proposal to replenish the Dead Sea by digging a $15 Billion canal from the Red Sea, about 100 miles away. (Photo by urban_hipster)

Man swallowed by a Sinkhole in Shenzhen city, China

April 1, 2013 rockman Failures Comments Off on Man swallowed by a Sinkhole in Shenzhen city, China

A frightening moment was captured on video when a security guard in Shenzhen city, China was swallowed by a sinkhole. The video indicated that residents complained of vibrations or tremors from a nearby construction site […]