Day 2 of Earth Retention 3 started off with a presentation on AASHTO LRFD for earth retaining structures presented by my boss Naresh Samtani and his co-author, Paul Sabatini.  It was a nice overview for those who haven’t been previously exposed to LRFD. A couple of the interesting comments by the authors include mention of some work for Arizona DOT regarding eccentricity that might have some implications in the AASHTO code (resultant within middle 2/3 instead of middle 1/2). Paul also mentioned some problems with cut walls in the code that need to be addressed, such as the lack of guidance for factors for temporary walls, and the need for better guidance for computing vertical pile resistance for anchored walls which currently requires the designer to use drilled shaft design procedures.

Brian Simpson with Arup discussed other limit state design codes around the world, particularly the Eurocode 7. But he also mentioned the Japanese code as another mature limit state code.  What I took away as one of the major differences between AASHTO LRFD and Eurocode 7 is that they factor the material properties and not the computed resistances whereas AASHTO factors the computed resistance and not the material properties. But Dr. Simpson commented that there were many similarities between the codes despite the fact that they were essentially developed independently.

Youssef Hashash presented an overview of seismic design procedures for buried boxes.  He indicated that generally buried boxes have performed well in major earthquakes. An exception to this was the collapse of the Daikai subway station in Kobe, Japan. One comment I found particularly interesting is his discussion about the effect of temporary shoring used to construct the box, they found that if you account for the full length of the shoring, it could increase the racking of the box.

Seismic Displacement Design of earth retaining structures was the title of the presentation by Jonathon Bray.  He discussed how the Mononobe-Okabe method requires the selection of the proper seismic coefficient, and his paper suggests that the permissible deformation of the structure should be a significant factor in the selection of the parameter.  Another interesting comment from his presentation was that for sites with peak gronund acceleration (PGA) <3g, no analysis is needed.  The next presenter, Marshall Lew indicated he was comfortable with the cutoff being 4g however his presentation was geared more towards basement wall excavations.

The technical session I attended in the afternoon had a landslide theme. John Wolosick from Hayward Baker, Inc. presented on 7 different projects that he had worked on, I can’t wait to go back and read the paper. Matthew Meyer with Langan Consultants presented on the stabilization of a 70-ft high side-hill fill in West Virginia and then I had to leave the session early to go to the field demonstrations. More on that later.

This first day of ER2010 was full of some excellent technical sessions.  As you might expect from a conference that occurs once every 20 years, there is a strong theme of looking back at what […]

GeoFrontiers 2011 Conference in Dallas off to great start

March 14, 2011 rockman Conferences Comments Off on GeoFrontiers 2011 Conference in Dallas off to great start

The Geo-Institute of ASCE is currently hosting the Geo-Frontiers 2011 conference in Dallas, Texas.  I was scheduled to attend, but had to cancel the trip at the last minute.  But I’ll still do my best […] 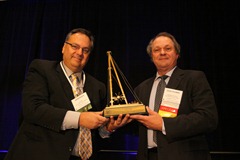 Hawthorne, NJ (December 1, 2012): David B. Coleman received one of the Deep Foundations Institute’s (DFI) highest honors, the Distinguished Service Award, in October during the DFI’s 37th Annual Conference in Houston. He was the 32nd recipient of the award, designated for individuals or companies chosen by their peers for exceptionally valuable contributions to the deep foundations industry.