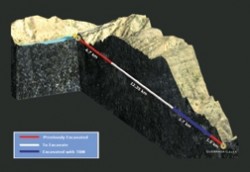 The construction of a 20-km tunnel that travels some 6,900-ft below ground has finally restarted after being broken down for several months after being damaged by a rock burst. The Los Olmos tunneling project will bring rain forest water to thirsty coastal Peruvian residents by means of a water supply tunnel under the Andes Mountains. I first posted about the project in 2008, but it was about 4-months ago that ENR reported that the TBM was seriously damaged by rock bursts and the parts were not available to fix it. The rock bursts continue, and now it appears that the project is over 2-years behind the original schedule, breaking through in Spring of 2012 with tunnel completion following 6-months behind. [Source: ENR: Engineering News Record. Image: Odebrecht] 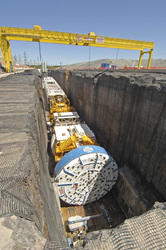 The German Chancellor and Chinese Premier toured a Herrenchnecht facility in China’s Guangzhou Province where Tunnel Boring Machines are manufactured for many of China and Asia’s high-profile tunnel projects. Herrenknecht maintains nine locations in China […]