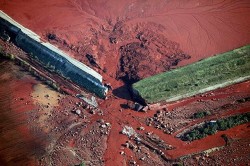 The devastating failure of a tailings dam in Kolontar, Hungary made headlines for the incredible environmental disaster created by the bauxite tails. In a presentation by an investigator that was located by Dr. Dave, the results of the investigation are in. The bottom line? The dam was constructed of fly ash without a liner and with little consideration given to the foundation. The seepage observed in advance of the failure indicated that excess pore water pressure was a key factor in the disaster. Dr. Dave has a link to the presentation. [Source: The Landslide Blog. Image: Greenpeace via The Landslide Blog]

Seequent is hosting a webinar on January 27, 2021 at two different times entitled “Interoperability for Geotechnical Workflows”. This webinar will review the geotechnical workflow for analyzing pore water pressures and stability of a tailings […]

Today was the first day of Geo-Extreme 2021 conference in Savannah Georgia sponsored by the Geo-Institute. If you aren’t attending, you can still tune in to the livestream of a few of the keynote lectures. […]