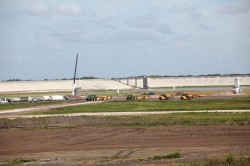 A five year legal battle between Tampa Bay Water and HDR Engineering over a cracked and damaged reservoir is finally over. Tampa Bay Water filed suit against HDR over the failure in 2008. After a second defeat in the courts, the Water District voted to end pursuit of the lawsuit and pay $21 Million in HDR’s legal fees. [Source: Read more about the case at Tampa Bay Times via ASCE SmartBrief. Image: Tampa Bay Times]

A failing retaining wall in Cincinatti is applying enough pressure to an adjacent brick apartment building to actually move portions of the building sideways by about 1-inch. You have to love brick buildings for forensic […]