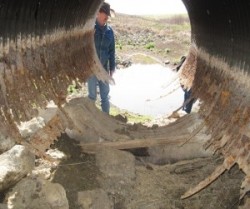 Nearly 3,000 dams in Texas will be exempt from inspection, including 216 that are rated as high hazard. This is thanks to a Texas State law passed earlier this year meant to lessen the burden on private dam owners in rural parts of the state. [Source: More at StateImpact Texas on NPR.org via AEG Insider. Image: TCEQ via NPR.org]

Texas Hi-rise To Be Demolished After 16-in of Settlement

September 23, 2009 rockman Failures Comments Off on Texas Hi-rise To Be Demolished After 16-in of Settlement

A partially completed luxury condominium development on South Padre Island on the Texas Gulf Coast is slated for demolition after it has settled by 14 to 16-in, more than double the settlement of the attached […]