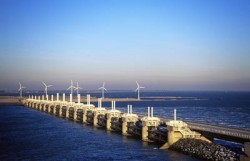 TenCate geosynthetics was a textile technology company in 1953 when disastrous flooding struck the Netherlands. The company came up with some of the first applications of geosynthetics that allowed the creation of the Oostershelde Flood Barrier, a massive dam supported by 66 concrete pillars, each of which is roughly 40 meters high. TenCate is celebrating the 60 year anniversary of this achievement and Geosynthetica has an infographic showing more about the Dutch Delta Works flood control project and TenCate’s role. [Source: geosynthetica.net. Image: Architecture.about.com]

The Geosynthetic Institute has published its list of webinars for the first half of 2021. As we all continue our strange pandemic work schedules, this is a great option for geotechnical engineers needing to get […]

Tensar Corporation will be making a significant investment in their Morrow, Georgia production facility where they manufacture geogrids such as their Triax line. The improvements will come online in 2012 and increase production capacity by […]