Big fat disclaimer: This post is based on my notes and recollection of what was presented, I don’t guarantee that any of it is correct. If you have questions about the SR 87 landslide, you should contact AECOM or ADOT directly. 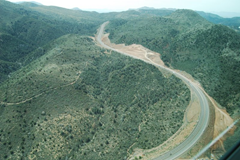 Keith gave the initial portion of the presentation. The landslide occurred on what was referred to as Segment F of an overall SR 87 reconstruction project undertaken in the late 1990’s. This segment was from Sunflower (MP 219) to MP 226, and construction was completed on it in 2001. The corridor traverses through a portion of the Tonto National Forrest. In order to avoid excessive ROW takes in the Forest, 4 soil nail walls (referred to as Sites 1 – 4) with 1.5H:1V slopes above them were constructed between milepost 224 and 226. Just beyond that, a significant embankment was constructed (at bottom of photo). (Photo by Brian Gootee, AZGS)

The walls and slopes appeared to be performing well until heavy rains in 2004 resulted in the upper portion of one of the soil nail walls at Site 1 failing at the north end. In 2005, the slopes were laid back some at Site 1, but later in the year, a complete failure of the Site 4 soil nail wall occurred, and the slope was laid back to 2.5H:1V. The fill removed from the slopes was used on the Southbound embankment slope to buttress it as there was apparently some distress there as well although it wasn’t discussed in the presentation.

In 2007 the wall at Site 1 failed completely. A so-called “Project 1” was later awarded to Royden Construction to regrade the area, and the contractor was working in the area at the time of the landslide. 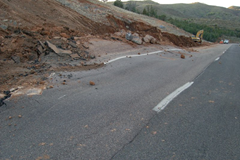 On March 21, 2008, a portion of the slope on the Southbound portion of SR 87 near MP 224 failed, buckling the southbound lanes upward by as much as 8-ft, shifting the median barrier and with offsets at the head of the slide of approximately the same magnitude. Some early descriptions of the slide were covered in a previous GeoPrac post based  on AZGS info posted on their website and the State Geologist’s Blog.  For reference, the failure occurred in the vicinity of Sites 3 and 4. (Photo by Brian Gootee, AZGS)

Since Royden was already on-site for their work to regrade another slope, ADOT put them to work almost immediately on emergency stabilization and repairs. They laid back the slope to 3.5H:1V and put a temporary buttress at the base. 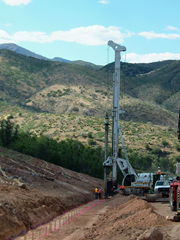 The temporary remediation to get the road re-opened included installing 89 30-in diameter shear pins spaced on 8-ft centers. I didn’t catch the exact depth of these pins. There was some seepage noted near the toe of the landslide, so they installed some drainage measures at the base of the piles. I described some of this work in another post here on GeoPrac back in December. (Photo from Arizona Geology Blog, original source not listed) 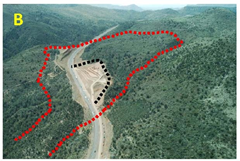 Keith turned the reins over to Wayne for this portion of the presentation. To start with, there was some geologic mapping performed during the design phase by Clay Conway of the USGS under an agreement with ADOT. He did map a landslide deposit at the location, but his scope was not a detailed mapping of the landslide area, but an overall mapping program for the entire alignment. Subsequent aerial photography, including color infrared photography revealed that the actual extents of the landslide deposit were in fact larger. (Image by AZGS)

You can probably find a more useful description of the geology in he report that the AZGS put out . My notes from this portion of the presentation are a little lacking! But I did catch that the basement bedrock was around 400-ft deep, and the ancient landslide surface was around 150-ft deep although the slip plane for this event was not that deep (somewhere on the order of 30-ft deep. The unit containing the slip plane is a weak sedimentary unit comprised of claystone.

The available mapping and aerial photo information was lacking at the time of the slide, so one or more sets of aerial photos were collected, including color infrared obliques. Of course the main investigation method was to drill. They performed a total of 17 Sonic borings (around 1,200 linear ft), around 19 HQ mud rotary borings (3,800 linear ft.) including holes up to 400-ft deep to encounter the basement bedrock, and around 20 hollow stem auger borings, primarily at the road level.

In addition to the boreholes, 21 slope inclinometers totaling over 3,700 linear ft were installed, 18 time domain reflectometry sites (3,654 linear ft), 33 vibrating wire piezometers, 3 wire extensometers, and 4 fixed borehole wire extensometers which extend the useful life of sheared off inclinometers to obtain data amount and rate of movement. The slide was (is?) moving at around 1/10-inch per week. Consequently, the inclinometers were typically sheared off within several weeks and the TDR cables lasted several months. The TDR installations have dataloggers and telemetry to send the data back to Terracon who installed the equipment and to my understanding, continues the monitoring on at least a daily basis. Scott Neely from Terracon gave a short portion of the presentation on the TDR installations and data analysis. There are also 63 survey monuments monitoring the slide that are read on a bi-weekly basis. 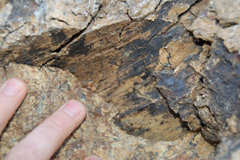 AECOM and ADOT utilized Landslide Technology of Portland Oregon, a division of Cornforth Consulting, Inc. to perform a peer review of the investigation and design for this project. The FHWA Central Federal Lands Highway Division out of Denver also assisted in a review capacity.

Laboratory tests on the material from the shear plane (CH and MH) gave a residual friction angle of 8-degrees. The slope of the failure plane is around 13-degrees. (Photo by Brian Gootee, AZGS)

More mitigation measures will likely be implemented at the head of the slide once the movement has been arrested. And AECOM’s geotechnical report to ADOT on the slide and the mitigation measures will likely not be ready for another 6-months to a year. AECOM and ADOT also continue to monitor the existing fill embankment just north of the landslide as the pavement there has exhibited some distress. The material excavated from the landslide has been used to buttress this area and some rock fill has been used to buttress some of the partially failing soil nail walls as well. 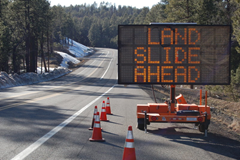 The SR 87 landslide has caught the attention of plenty of people in the State of Arizona. It’s been a personal fascination of mine from day 1, there just aren’t that many landslides like this in Arizona! Keith, Wayne and Scott gave a very nice presentation and I wish them the best with this extremely challenging project. If you missed the presentation, you can catch Keith and Jim Wilson from ADOT presenting on this project at the 34th Southwest Geotechnical Engineer’s Conference in Phoenix on May 12th. Or, Wayne and Pancho Garza (also with AECOM) will be presenting at the AEG National Meetings in Lake Tahoe September 21-26.