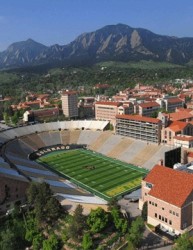 Nicholson Construction Company, a GeoPrac sponsor, has been working on 68,000 square feet of shoring and permanent retaining walls for an indoor practice football field and running track, as well as two levels of underground parking at the University of Colorado Boulder. The wall types include soil nail walls, cantilevered drilled shaft and shotcrete wall, and cantilevered soldier pile with wood lagging. The project has been running since this summer and is projected to be complete in February. [Source: Read the full press release from Nicholson Construction Company. Image: Nicholson Construction via the Colorado Daily]

The Cycles of Clough

September 7, 2010 rockman Project Related Comments Off on The Cycles of Clough

At last month’s Earth Retention Conference, ER2010, there were many references to the second ER conference in 1990. One paper from that proceedings that garnered many mentions and was referenced by several at this year’s […]