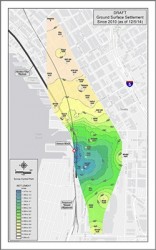 Areas surrounding the access pit being excavated to rescue the stalled Bertha TBM have experienced settlement as much as 1 to almost 1.5 inches according to a draft figure released by WSDOT on December 11, 2014. The aging and seismically deficient Viaduct itself has experienced 1 inch of settlement as well. Structural engineers have inspected it as well as numerous buildings in the area and have not found structural damage. The settlement is thought to be related to the dewatering associated with the access pit construction. The excavation was within 3 feet of the bottom when the settlement issues were first announced on December 5, and WSDOT has since allowed the contractor to complete the excavation. [Source: Read more information in the update provided by the WSDOT Alaskan Way Viaduct Replacement Project team. Image: WSDOT]

Rockscience has been busy soliciting feedback from their user base on news features for their settlement analysis software program, Settle3D. After receiving all of the feedback in the beta program, many of the user suggestions […]

When your gypsum plant is capable of producing 900 million square feet of wall board every year, you can’t afford to see your process shut down by settlement or problems with groundwater infiltrating or soil […]