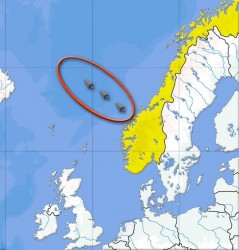 The largest known undersea landslide occurred over 8,000 years ago off the coast of Norway. The volume of material that moved is mind-blowing, over 4.6 X 1012 cubic yards or 850 cubic miles! Known as the Storegga landslide, the resulting tsunami buried neolithic settlements in Norway with sediment and caused wave runnup in Great Britain that was 80 feet higher than the normal high tide. The devastating loss of human life can only be imagined. Regarding that last question, anthropologists theorized that depending on the time of year when the disaster occured, the loss of life may have been less. During the summer and early autumn, most people in that region would have been in the highlands hunting moose and reindeer. The article linked below is about some interesting forensic geology work to determine the season when the landslide occurred. [Source: Read more at Dispatch.com. Image: “StoreggaFLCommonsZone” by Lamiot – Own work. Licensed under CC BY-SA 3.0 via Wikimedia Commons]

There were three fairly recent rockfall events with fatalities that made the news and caught my eye. State Highway 36 in New Zealand is still closed after a major rockfall occurred in Rotura. The photo […]

There was a huge rockslide in Sichuan Province of China on June 24th that buried the town of Xinmo early in the morning. Early figures were that 118 people were missing and 15 victims had […]