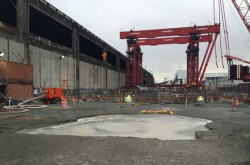 The Bertha TBM creating the Alaska Way Viaduct Replacement Tunnel and the Seattle Tunnel Partners JV just can’t seem to catch a break. After being stopped for nearly 2 years to replace the entire cutterhead and make other repairs, Bertha finally began tunneling again just before Christmas on December 23. The machine had tunneled about 100 feet as of January 13 when there was a problem with a barge that was transporting excavated material from the tunneling. It began listing from an uneven load, was released from it’s moorings to avoid damaging the conveyor system, and spilled (supposedly uncontaminated) soil in Elliot Bay. The barge then impacted two piers, it didn’t sound like the damage was significant.

Just a few hours after the barge incident, a sinkhole opened up in between the repair pit and the TBM location. On January 14, WSDOT notified Seattle Tunnel Partners that the tunneling was suspended "for cause" pending a safety review. Even the governor of Washington weighed in on the issue. The sinkhole has been filled with concrete now. The concern by critics is the obvious question of what will happen if there is ground loss like this under the viaduct, or underneath downtown Seattle. If you recall, the project included jet grouting beneath the viaduct, so that should help reduce the risk there, and STP has said that once Bertha dives deeper, the risk of sinkholes will reduce. It sounds like the long hiatus had cause them to be a little complacent about the monitoring of the material coming from tunneling. Normally there is a very careful accounting of all the material that is excavated to predict when there is a ground loss risk. I don’t think that will happen again! [Source: Read or watch the Washington Governor rail on the tunneling safety. Image: Seattle PI]