On March 9, 2018 a “limited breach” of the tailings dam at the North Tailings Facility of the Cadia Mine tailings impoundment occurred in New South Wales, Australia.  The area of the failure is approximately 270 m across, with a back-scarp of about 100 m.  The runout was about 370 m.  All things considered, it could have been worse.  The mine owner, Newcrest Mining Limited, has ceased mining operations while they deal with the issue, and has begun radar monitoring.  No additional movement had been detected as of last week.  More information can be found in the briefing given to shareholders, and in the initial press release.  Image: Newcrest Mining Limited

Seequent is hosting a webinar on January 27, 2021 at two different times entitled “Interoperability for Geotechnical Workflows”. This webinar will review the geotechnical workflow for analyzing pore water pressures and stability of a tailings […] 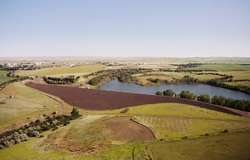 The Mill Creek Dam near Walla Walla, Washington has served its purpose admirably for over 67 years but according to a recent report by the US Army Corps of Engineers, the dam received a Dam Safety Action Category (DSAC) rating of 1 out of 5 which means that the risk to public safety is too great when Bennington lake which is formed by the dam is more than 17% full for an extended period of time. More after the break. (Photo by USACOE)