The failure was caused by several factors. The actual trigger of the event was a failure of the computer software that controlled the filling of the reservoir. It continued to fill the basin after it had reached it’s maximum capacity. No emergency spillway was in place so the failure likely resulted from erosion of the dam caused by overtopping. But there were also piping problems as well that were reportedly not addressed by Ameren.

It’s interesting to note that the hydro plant will be rebuilt and is expected to be operational in late 2009. It is unique in that there is no source of flowing water. It was designed to meet electricity needs during the peak of the day by running its turbines. During the off-peak hours, electricity is used to run the pumps to fill up the reservoir once again. 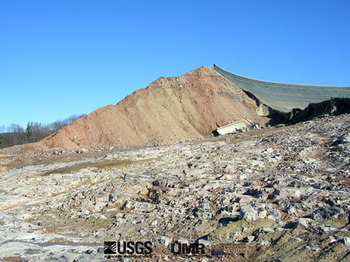 [Update 4/11/12] Hayward Baker (a GeoPrac sponsor) is the geotechnical contractor performing the grouting under subcontract to the JV, thanks for the correction Tanner.  The JV is performing the cut-off wall work.  I should also […]

Severe erosion was discovered on an October 2008 inspection of Allegheny River Lock and Dam No. 6 near Pittsburgh, PA, a US Army Corps of Engineers structure. In the Q1 2009 issue of PileDriver Magazine […]