A rockfall event has closed Colorado Highway 145 in the southwest portion of the state after two house-sized boulders destroyed the full width of the highway pavement. The event occurred on Friday before the Holiday […]

Arizona DOT is undertaking a project to remove hazardous rock formations above Highway 77 between the towns of Globe and Winkelman, AZ (east of Phoenix). On November 29/30, The blasting work inadvertently dislodged an 18 […]

The Arizona DOT and their contractor have begun blasting and earthwork to realign a portion of US 89 in northern Arizona near Page that was cut off by a large landslide in February of 2013. […]

This is a great video montage of rock blasting for Washington State DOT’s I-90 Snoqualmie Pass project. It’s not clear from the description if this blasting actually occurred on this project or its from other […]

Blasting for the New York MTA’s Second Avenue Subway project unexpectedly showered the street level with debris, damaging buildings. Fortunately there were no injuries. Some debris reached the height of a 5 story building. [Source: […]

For a wind farm near Lawton, OK, many of the foundations consist of rock sockets 19 feet in diameter, 20 feet deep. The rock was blasted to presplit the holes and facilitate excavation. The bedrock […] 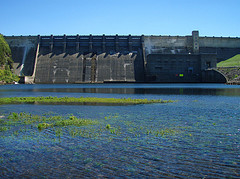 LANCASTER — Months of explosive blasting are expected to begin at the site of Center Hill Dam next week as the U.S. Army Corps of Engineers prepares to begin construction work at the aging dam in Lancaster.

"The blasting will be to excavate a platform for construction, about 40 feet wide and will look similar to a road cut through a hill," [Corps Project Manager Linda Adcock] said. "Just the nature of how we grout, and moving equipment back and forth on the current slopes, which are as much as 40 percent and greater, is just really difficult. So for these reasons, for safety, quality, the accuracy and the consistency of the drill holes are much better done from a platform, they proposed this road cut type of a platform."

The drilling is for grouting remediation of the dam foundation. Story from Herald-Citizen, Cookeville, Tennessee.