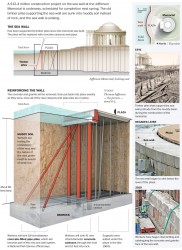 The Jefferson Memorial itself is supported on a network of 600+ concrete piles and drilled shafts that penetrate through soft Patomac River sediments and dredged material into bedrock between 80 and 138-ft below ground. However, the seawall is supported on timber pilings that are estimated to be 65 to 75-ft long, stopping short of the bedrock. The wall has been settling below the level of the adjacent plaza since about 2006 as reported by GeoPrac back in 2007. At that time Schnabel was preparing a report for the National Park Service, but I never heard anything else about it. General contractor Clark Construction Company has been working on a $12.4M repair project that includes constructing a temporary cofferdam, deconstructing the existing seawall while salvaging the historic stone facing, installing 4-ft drilled shafts into bedrock and battered concrete-filled pipe piles to support a new seawall. The project is expected to be completed in the spring of 2011. [Source: Washington Post via ASCE SmartBrief. Image: The Washington Post]

The Curious Case of No. 57 Stone

May 12, 2014 Katherine Witt Articles, Forensics and Failures Comments Off on The Curious Case of No. 57 Stone