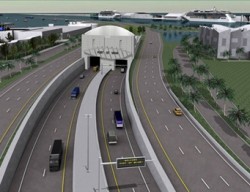 The Port of Miami mega project is celebrating a significant milestone today. A massive 41-foot diameter tunnel boring machine will start excavating the first of the twin tunnels that will connect the Port of Miami with Watson Island. The TBM will reach the port in about 6 months and turn around to complete the other tunnel. The target project completion date is May 2014. [Source: NBC Miami via ASCE SmartBrief. Image: Port of Miami Tunnel]

PITTSBURGH, PA – January 15, 2010 – Nicholson was awarded a subcontract by Traylor Bros./Frontier-Kemper JV that includes temporary shoring and the construction of the permanent reinforced concrete diaphragm walls for the a new light rail station near the University of Washington’s Husky Stadium in Seattle. The project owner is Sound Transit and the work will be completed in a joint venture with Condon-Johnson & Associates. [Editor] Click through for the entire press release from GeoPrac.net sponsor Nicholson Construction. [/Editor] […]