If you are not familiar with the landslide, start with my previous post about the original landslide event that closed SR 87.  The AZGS issued an open file report describing the SR 87 slide and providing results of their mapping efforts in the area that identified additional prehistoric landslides immediately surrounding the most recent failure. Their report has excellent information on the slide itself and the geology of the area, but it (rightly so) does not cover any type of geotechnical analysis or modeling of the failure or the remediation necessary.

Back to last week, in an AP article I found on KSWT, the latest situation was described:

ADOT spokesman Doug Nintzel says engineers noticed a mound of soil bulging on the slope above the roadway on Wednesday (December 17, 2008) at the site of the March landslide that closed the highway between Phoenix and Payson for several days. 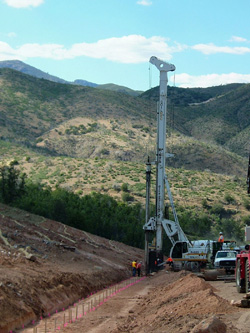 On Lee Allison’s blog, he has a nice photo of some of the remediation work being installed in the weeks and months after the slide. It included some kind of shear pins (drilled shafts) at the toe of the landslide. I would presume there was some kind of cap beam as well but I’m not sure. I don’t know the details or the spacing or the other dimensions either. But Lee does go on to say that he has heard reports that the shafts have been deflecting towards the road. This observation, if true, confirms what I have heard, which is that the inclinometers that were installed after the landslide occurred were sheared off by the slope movement within a short period of time. They reinstalled several others with similar results indicating the slide continues to creep. I thought I read somewhere that there is deformation to the roadway again, but not enough to close the highway…yet. (Photo from Arizona Geology Blog, no original source cited)

The AP article indicates that in the Spring of 2009, ADOT intends to construct a “retaining wall” to stabilize the slope, Phase II of the stabilization. I presume they are talking about some kind of tie-back wall. I’m not sure if this will be to tie back the existing shear pins or whether it will involve a completely new remediation plan. As soon as anything comes up, I’ll post it here of course.

Landslide on Route 30 in East Pittsburgh

A section of Route 30 in East Pittsburgh, Pennsylvania has been destroyed by a landslide, and the road could remain closed for several months.  An apartment building down-slope has also been destroyed, although all residents were […]

Some clever researchers have devised an algorithm to collect information on landslides occurring around the world by analyzing social media posts. They use a variety of search terms to flag a post as being potentially […]