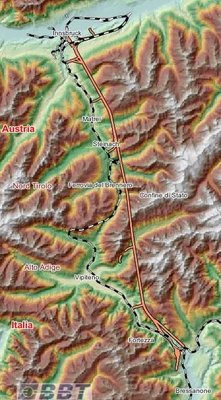 Italy and Austria just signed a contract to ensure the financing of the Brenner Base Tunnel. This railroad tunnel will traverse the Alps in north-south direction thereby greatly improving the connection between Austria and Italy. It will be part of a high speed railroad link between Berlin (Germany) and Palermo in southern Italy. Travel time between Innsbruck (Austria) and Bozen (Italy) will reduce from currently 2 hours to only 50 minutes. Additionally, the freight capacity between Austria and Italy on the heavily traveled north-south traverse will be tripled!

The length of the tunnel is estimated to be about 55 kilometers. The cost is estimated to be on the order of 6-8 Billion Euros. The governments of Austria and Italy assume that the European Union (EU) will pay for half of the cost.

[Editor] On June 29, 2007 there was a ground-breaking ceremony marking the start of the preparation works of the exploration tunnel. [/Editor] Construction of the main tunnel is scheduled to begin in 2010, while the completion is expected to be between 2020 and 2022 at the earliest. The figure shows the proposed tunnel alignment (red) along with the existing alignment of the railroad connection between Austria and Italy over the Brenner Summit.