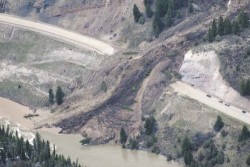 A huge 35,000 to 40,000 cubic yard landslide has blocked Highway 26/89 for about 300 feet with material about 40 feet high. The slide is about 2000 feet long, terminating in the Snake River. It is still moving about 1 foot per day. Plans are in place to begin clearing the material, but WYDOT does not want to start until the risk of more material coming down has subsided. [Source: Jackson Hole News&Guide via USGS Landslide Events]