The Memorial was constructed in the 1930’s and 1940’s on pilings and caissons atop an artificial mudflat approximately 100-ft thick consisting of material dredged from the Potomac River. The site was chosen despite it’s poor geotechnical conditions because it is in a north-south line with the White House.

According to the Washington Post article where this post was derived from, the main structure does not appear to be in jeopardy. As mentioned previously, it is founded on piles and caissons, but these deep foundations are arranged in concentric circles, and penetrate as deep as 138-ft to the bedrock below, deeper than the foundations of any of the other nearby memorials. The plaza previously had remedial work performed because it was not supported on the same deep foundation system. Now it appears as if the seawall may need remediation.

The National Park Service has hired Schnabel Engineering, a Virginia-based company, to determine whether the memorial is safe, find out what is going on and come up with a way to fix it. Their report is due on July 10. Check back here on GeoPrac for updates. 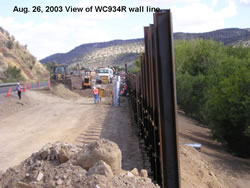 In this part 2 of 2, various types of retaining walls are examined as possible alternatives in a side-hill retaining wall situation. These include conventional wall types such as CIP walls, MSE walls, gravity walls and soldier pile walls and some less conventional approaches such as lighweight concrete fill, hybrid soil-nail and geofoam wall systems, ground improvement and micropile walls.

Part 1 of this Side Hill Retaining Wall article covered the definition, significance, problems and failure modes, investigation techniques, analysis, and construction considerations of side hill walls. A PDF version is now available for download as well. Click through for the article and the download link!