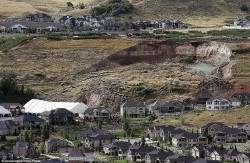 The couple owning a house up-slope from a massive 2014 landslide is accused of overwatering their lawn, leading to the landslide in a lawsuit filed by the developer. The developer also blames a natural gas company, and some other nearby construction, but had denied any responsibility for the slide. In a countersuit, the two homeowners say they are being scapegoated and blame a natural gas company that owns and operates two pipelines near the slide, two geotech firms that studied the land prior to further development and the local tennis club for expanding a parking lot at the base of the hill. This sounds like a completely tangled up mess! [Source: Daily Mail Online. Image: Associated Press via The Daily Mail]

Five houses were destroyed and two more severely damaged but nobody was injured in a mudslide and debris flow that occured near Oliver, B.C. on Sunday. It occurred at 2:20 in the afternoon, and there […]

Utah to Release Recommendations for Geologic Hazard Regulations for Development

August 27, 2007 rockman Regional Comments Off on Utah to Release Recommendations for Geologic Hazard Regulations for Development

As reported in a previous post, Utah has been considering adopting model legislation for local municipalities to make it more difficult for developers to develop in landslide prone areas. Apparently the Geologic Hazards working group […]