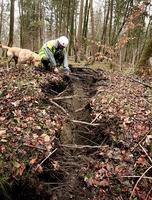 For days, cracks have been occurring in the ground.  The local disaster management agency is doing its best to evacuate residents (sixty houses so far), while geologists are trying to explain the phenomenon.  In their opinion, the reason for the movement lies in a local rift, which separates the harder limestone alps from the softer shale zones near the lake.  Erosion and weathering have filled the rift with water, which now pushes the softer zone downhill into the lake (water is the culprit, big surprise).  The area being pushed measures approximately 1 kilometer by 80 meters. Some houses affected show cracks in the inch-range. It has been known for decades that slight movements in the area occur occasionally. However, nobody anticipated what is happening right now.

A thief stole a taxi at knife point in Brookings, Oregon recently, and then tried to escape when a police officer attempted to pull him over in the stolen vehicle. He ignored signs of a […]

Another El Nino storm just moved through Southern California culminating in significant rainfall on Saturday producing mudslides and debris flows in the area hit by this past September’s Station Fire. More after the break. (Photo from Sacramento Bee, David McNew – Getty Images)