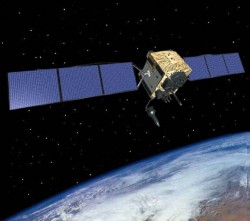 The new satellites are for military as well as civilian use and are meant to replace the aging system of satellites that are currently in service. They offer a number of improvements, including a stronger signal that means an increased accuracy. How does 3-ft sound instead of 20-ft? The next launch is scheduled for November, 2010. [Source: Google Earth Blog. Image: U.S. Air Force]