The overall system is the brainchild of Cyril J. Silberman, CEO of a "kinetic architecture supplier", Uni-Systems LLC in Minneapolis and his structural engineer partner, Lawrence G. Griffis of Walter P Moore. These two gentlemen have been behind at least 6 other similar projects with rolling roofs, including the Houston Astros, Houston’s Reliant Stadium, the Arizona Cardinals stadium, and the Indianapolis Colt’s new stadium. (Photo copyright ENR, Daryl Shields, and HKS) 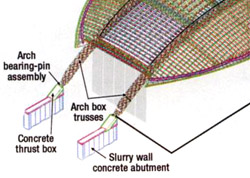 Each arch rises 292-ft above grade, and generates a 9,500-ton thrust reaction at each abutment. The foundation system consists of a concrete thrust box to which the arch is attached with a bearing pin and a 3,400-cu-yd buried concrete box that is 176-ft long, 71-ft deep and 18-ft wide! The "shoebox scheme" was designed by noted geotechnical engineer Clyde N. Baker Jr. of STS/AECOM. In order to construct the system, 30-in thick slurry walls were used. The construction of the foundations took 5 months. The overall STADIUM cost was $690-million, including property acquisitions and other related projects, the entire project may come in at nearly $7 Billion. No word on how much the foundations cost. (Rendering copyright ENR and Walter P. Moore)

European geotechnical contractor Trevi SpA is preparing to set a new record for the deepest slurry wall ever constructed at 250 meters, which exceeds the previous record by 100 meters according to The New Civil […] 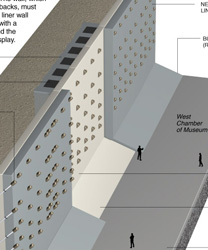