Before you go out and buy RoboGEO, you might want to try out a free alternative, GPicSync. It will get the job done but it obviously doesn’t have all the bells and whistles that RoboGEO does. I gave it a shot the other day to compare with RoboGEO and here are the steps to geotagging with GPicSync. Read carefully for a few caveats about problems I ran into. 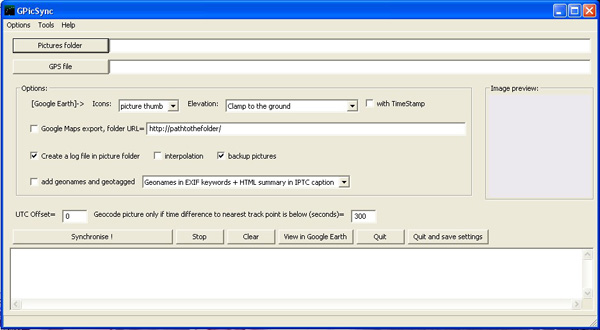 You specify the entire folder of images and the GPX file to use for geotagging (Figure 14). It also has a preferences option for Camera offset but I didn’t try that. It will write the coordinates to the EXIF headers, and optionally it will attempt to use some open source database to come up with a location name based on the coordinates and write that to some other field in the EXIF headers. It also outputs KML files but no KMZ files. If you want to distribute the file you have to manually upload the images to a web folder and specify that folder or have the images in a local network folder in the case of distributing the file within your company. 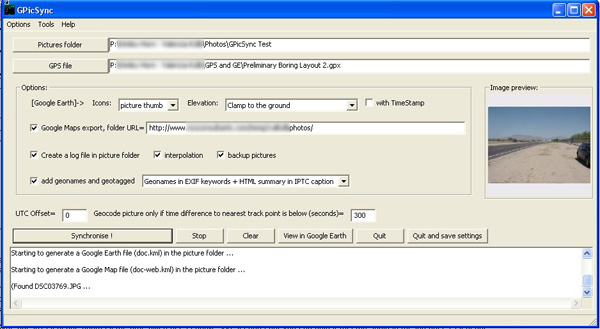 Note in Figure 14 that the UTC offset (time offset in hours from Universal Time or Greenwich Mean Time) was left at the default value of 0. The first time through it wouldn’t geotag any photos because there were no track points within 300 seconds (default setting) of my photo timestamp. The documentation indicates that you can leave this at 0 and just use whatever the camera and GPS are set at, but it appears that the software automatically converts the GPS tracks timestamps into UTC, so you have to adjust the offset. For North and South America, this offset should be a positive number, but in this software I had to enter a negative offset to get it to work (see Figure 15).

Once I did that, it geocoded the photos without any problem. It does take a while, but so does RoboGEO. One interesting thing is that it tells you how many seconds difference between the timestamp on your image and the track log point recorded closest to that time. Mine were averaging between 30 and 50 seconds. If I wanted to decrease that time, I might check the tracks settings on my GPS unit to see if I can increase the frequency of the points. 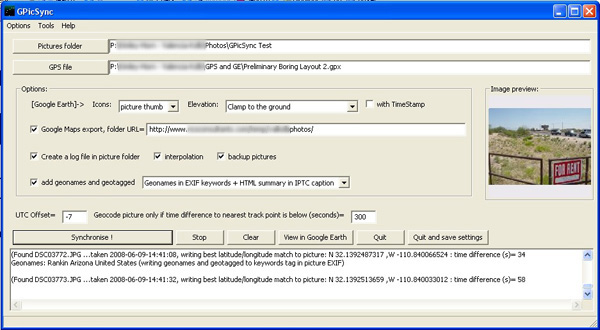 Figure 15: Second try at geotagging photos with GPicSync (Had to use the UTC Offset, and the sign is flipped too)

Here is the result in Google Earth. GPicSync also has the option of using the camera icon as shown in the RoboGEO output. The thumbnails are actually a little hard to see for this project because everything was desert color…which blends in with the aerial. 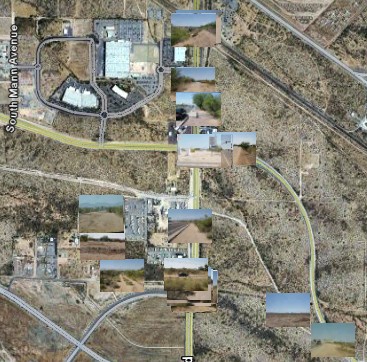 Below, Figure 17 shows what it looks like when you click on the photo. It displays the filename and doesn’t give you any options to change the name of the file or add a description like RoboGEO. But you can always manually edit the placemark description in Google Earth and re save the file. 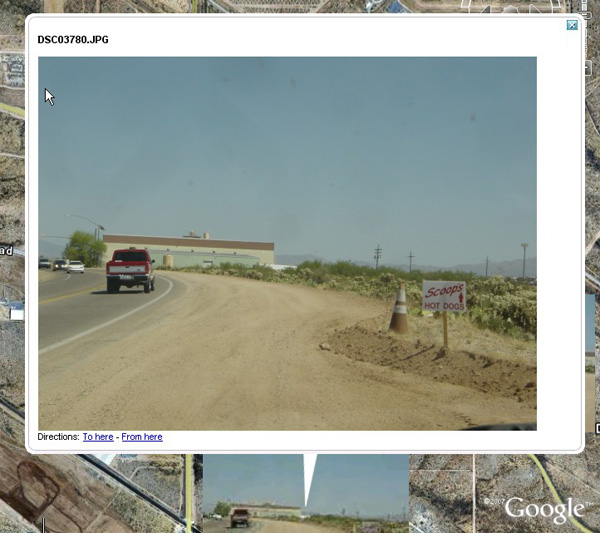 Google has released Google Earth 6.2 for iOS and Android, including the long awaited ability to work with KML files. Frank Taylor reports that some of the more advanced features of KML files such as […]

A new version of the popular gridding and contouring software, Surfer 10 is now available from Rockware, Inc. Some of the improvements include a 64-bit version, the ability to mix data with different map projections […]