A Japanese company, OYO Corporation, created the PS-suspension probe for recording P-Wave and S-Wave velocity data in geomaterials using one borehole back in the 1980’s. A recent update to the probe has made it digital.

The probe is most frequently used in the off-shore oil and gas industry but has also been used on a limited basis in the US, most notably on several high-profile San Francisco Bay-area bridges. It has the capability of logging this data up to a depth of 500-m in an un-cased open, water-filled borehole. More info at New Civil Engineer. 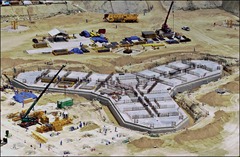 Any geological engineer or engineering geologist worth their salt knows that the Hayward Fault goes right through Cal’s Memorial Stadium. The stadium will be undergoing some $321 in repairs and seismic upgrades before it reopens […]