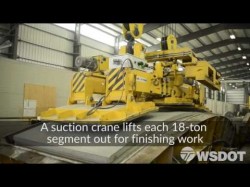 The tunnel liner that is being placed by the Bertha tunnel boring machine consists of precast concrete segments. This video by the WSDOT shows how they are made at the casting yard, and what Bertha does with them once they get delivered to her where the action is happening. The finished tunnel will consist of over 14,000 of these precast segments! [Source: WSDOT YouTube Channel. Image: YouTube]

Not too many details here since I am not a subscriber to their magazine, but it does appear to be some much needed good news for the King County, WA (Seattle area) Brightwater treatment plant […]

WSDOT held a press conference on Friday to discuss findings regarding the obstruction that had stalled the Bertha Tunnel Boring Machine since December 6. It is an 8 inch well casing, 119 feet deep from […]