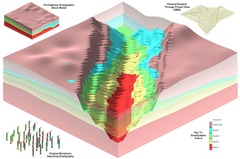 RockWare, makers of the popular RockWorks software package announced recently the release of a brand new version of their flagship software. Their announcement claims that RockWorks15 has many new features, below are a few that caught my attention.

On April 10, GeoStudio 2007 version 7.1 was released, a significant service pack update. There are numerous bug fixes and some major improvements. Geo-Slope claims that the overall speed of the product is faster when switching between analyses and views, a welcome change. There are some nice changes to the way Sketch Text is handled, which makes it easier to handle annotation of multiple analyses. And something interesting that’s new in SLOPE/W that allows you to specify a â€œSpatial Mohr-Coulombâ€ model which allows unit weight, cohesion and friction angle to vary across the geometry as a function of x and y. I canâ€™t think of a case where I would have used such a model, but it is very intriguing. More features listed after the break along with links.

Revised, new, and reapproved ASTM standards for the month of July. This month was a busy one for the various comittees with 108 standards  related to concrete, geotechnical lab testing, asphalt, lab testing and other standards updated. Read on for the list.