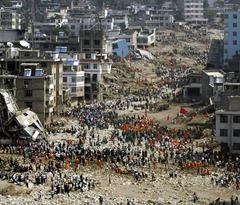 Over the past week there has been devastating flooding and landslides in the Gansu Province of China, particularly in Zhouqu county.  According to BBC, the latest death toll numbers are at 1,239.  Here are some recent links I’ve collected. (Photo: Daily Mail)

Mud and debris from a small landslide closed a portion of Sepulveda Blvrd. In Westwood California on Thursday. The slide took out at  least one local resident’s backyard and was large enough to block several lanes of the roadway with debris up to 6-ft high in addition to knocking out several power poles and disrupting service. The material was cleared up by 10pm but not before it cause some inconvenience to UCLA basketball fans on their way to watch their team beat Stanford. The LA Times reports that there were questions about possible broken water lines, of course it is the old "chicken or the egg" argument that’s been seen before (including on a recent landslide) about whether the broken water lines contributed to the landslide, or the landslide caused the water line breaks. (Photo by Al Seib / Los Angeles Times)