In coordination with the Japanese Geotechnical Society, the first group of GEER members, consisting of Ross Boulanger (Team Leader), Scott Ashford, Jennifer Donahue, and Jonathan Stewart visited sites in the Kanto Plain region during the period of March 26 to April 1, 2011.  Their trip was constrained by time available as well as the need to stay clear of ongoing humanitarian operations as well as the limited by the crisis at the Dai-ichi nuclear power plant in Fukushima. They focused their efforts on documenting the damage to various facilities, with special attention given to evidence of damage that will be cleaned up quickly or vanish because of natural processes. 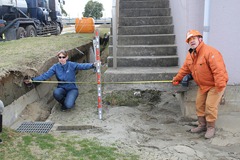 The amount of liquefaction related damage shown in their photos and video is simply staggering.  They show seaports, water treatment plants, residential buildings, and town and village main streets that are covered in sand that boiled up from the ground as a result of the strong shaking.  Buildings and structures have tilted, and some settled by as much as a meter or two.  There is even photos showing a sewer line that floated up to the surface when the soil around it liquefied.

The data that was collected by this and other GEER teams and the follow-up analysis will allow geotechnical engineers and others to learn from the tragic events and hopefully lead to safer, more earthquake resistant designs.

Video of Liquefaction Damage from the 2011 Japan Earthquake

Most geotechs are familiar with the Journal of Geotechnical and Geoenvironmental Engineering (JGGE), one of the (if not the) premier journal in the industry. It’s published by the ASCE’s Geo-Institute (G-I) and accounts for about 20% of the revenue of the G-I organization.

The G-I’s President, Dr. Jean-Louis Briaud, convened a task force in early 2009 to investigate if the JGGE is “adequately serving as a venue for practice oriented papers.” According to the final report from the Proposed "Journal of Geotechnical Engineering Practice" Task Force, the reason for the task force is that:

KeyLAB’s rate card and invoices features are very powerful but often underused.  If you run a geotechnical laboratory, you know what a challenge it is to keep up with the paperwork side of the business! […]