The soil/rock conditions were generally loose to medium dense sands overlying weak to very week sandstone and siltstone with interbeds of gypsiferous and carbonate cemented layers (still relatively weak). Geotechnical investigations consisted of approximately 33 boreholes drilled with several techniques. In addition to SPT sampling, double-tube rock coring and approximately 60 pressuremeter tests were performed as well as cross-hole seismic surveys (both P and S-wave). Static load testing was performed on 7 test piles prior to construction and 8 production piles (approximately 1% of the piles) were tested as well. One lateral load test was performed. (Photo from BurjDubaiSkyscraper.com) 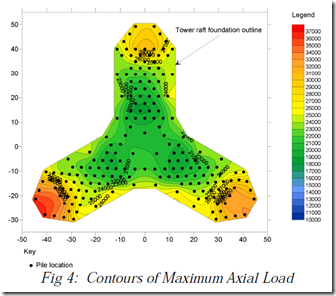 Various finite element software packages were used in the analysis of the foundation system for the structure. The figure above from Poulos & Bunce (2008) shows the interesting layout of the piles as well as contours of the maximum axial load. It indicates that the maximum axial load was in the neighborhood of 37 MN (units?). The static load test program was conducted to a maximum load of 64 MN.

The estimated settlement from the design phase was approximately 75-mm (almost 3-in) but monitoring performed during construction showed only approximately 30-mm (roughly 1.2-in) by March 18, 2007 when approximately 75% of the dead load had been applied.

Revised, new, and reapproved ASTM standards for the month of July. This month was a busy one for the various comittees with 108 standards  related to concrete, geotechnical lab testing, asphalt, lab testing and other standards updated. Read on for the list.

More and more of Keynetix’ customers are using the electronic scheduling tool in HoleBASE SI.  Although the tool is easy to use there are a number of considerations that should be made when communicating your […]