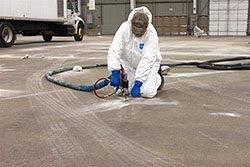 January 31, 2012 MOUNT AIRY, NC — Kansas City, Missouri’s historic American Royal got its start way back in 1899 and today draws more than 250,000 people over an annual eight-week season of barbeque contests, rodeos, livestock shows, equestrian events and agricultural activities benefiting youth and education. The 14-acre complex’s buildings, though, have a problem common to the confluence of the Missouri and Kansas rivers—the soil beneath them erodes and concrete slab floors become uneven.

Like most of the Kansas City metropolitan area, the land on which American Royal stands is an ancient riverbed, or channel for retreating glacial melt and contains thick limestone, channel sandstone, and shale. While the mix is a solid, stable base, sometimes the supporting geology shifts and presents challenges for concrete sidewalks and slab floors. 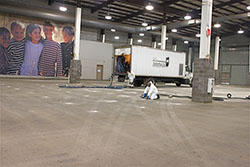 The floor of Governor’s Exposition Hall began shifting back in 1980s and the only remedy was to fill the voids beneath it with asphalt, and eventually to apply asphalt over the slab for a level surface. Finally last year the American Royal management was faced with a tough choice—find a better, more permanent solution or tear up the entire floor and replace it. “That would have cost us millions of dollars,” says Dean Barrett, deputy director at Kansas City’s Department of Convention and Entertainment Centers. “I read about polyurethane geo-technical foam and called around to learn more. We put the job out for bid and chose the local company Pro Foundations Technology from the many we received from across the country.” 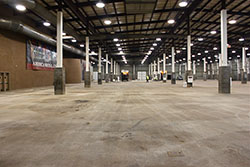 Joe Morgan of Pro Foundations says his company got to work “foamjacking”—a relatively new term based on the legacy method of “mudjacking” in which a slurry, or grout of water, dirt and cement is pumped under a concrete slab to lift it to its original level position. Foamjacking uses TerraThane™ polyurethane geo-technical foam instead of the mud slurry. The polyurethane foam is lighter than grout so it doesn’t overburden the soil, and very high compression strength so it handles heavy loads.

“TerraThane™ is an ideal product for void filling and concrete lifting,” says Morgan. “We use this specially formulated, dense foam system made by one of the U.S.’s oldest and most trusted geo-tech foam houses, NCFI Polyurethanes. We drilled through 30-36” of asphalt and concrete, pumped the two-part TerraThane™ foam into the holes to fill the voids then raised the slabs to level.” 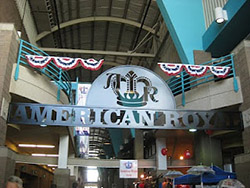 Morgan says his firm has been using TerraThane™ for more than four years because it is more efficient, economical, requires less-to-no maintenance and is safer to apply. “Equipment for the old mudjacking method has lots of moving parts and can cause injuries. Foamjacking is much simpler with the application process using only one moving part.”

Barrett says Kansas City is pleased with the successful results of the December 2011 work. “We’ve got a level floor and it saved us millions of dollars. We’ll be using it again for other projects here at American Royal.”

Pro Foundations has been providing concrete lifting and leveling, foundation repair, and waterproofing and foundation pier technology since 1978. They offer foundation repair, basement waterproofing, high density polyurethane concrete leveling, mudjacking and concrete surface prep throughout the Midwest including (but not limited to) the cities of Kansas City, St. Louis, Jefferson City and Columbia in Missouri and Overland Park, Kansas City, Lenexa, Topeka, Lawrence and Olathe in Kansas. For more info visit www.profoundationtech.com, (888) 477-8812.