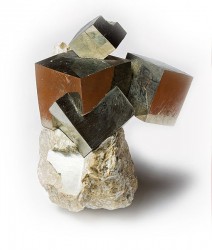 The National Standards Authority of Ireland (NSAI) has released a new standard regarding testing, categorization and remediation of pyritic backfill materials. These materials have finely disseminated reactive pyrite within the material, typically from quarry waste. The material was commonly used as fill beneath houses in 2005 – 2007 and has been known to heave and swell. There were so many affected properties that an Irish new home warranty provider, Home Bond, withdrew coverage prompting a government investigation. The NCE article estimates that some 12,000 homes are at risk, and only 1,100 have been remediated. The report from that investigation was issued over the summer and forms the basis for the new standard. [Source: New Civil Engineer. Image: JJ Harrison via Wikipedia]

This is an interesting geology mystery that they may be getting closer to solving. On top of a 36 foot high vertical cliff on the coast of Ireland is a tabular bedrock formation. Giant boulders […]