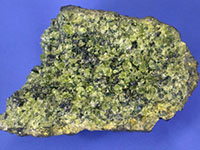 Most carbon sequestration approaches focus on injecting CO2 underground for storage in porous aquifers and hoping the gas doesn’t escape. There are other problems with this approach as well, including chemical reactions that create Carbonic acid and a resulting low pH.  As reported by Technology Review, Scientists at Columbia University have discovered a promising new approach, to store CO2 in peridotite, which reacts with the gas to produce Calcium Carbonate or Magnesium Carbonate rock, otherwise known as limestone and dolomite. The initial studies were performed on a peridotite deposit in Oman, but deposits are also located in California and New Guinea. This will be an interesting technology to watch. (Photo of peridotite from University of Pittsburgh, Department of Geology and Planetary Science)

Carbon sequestration is a hot topic these days, and the Arizona Geologic Survey (AZGS) is working with a consortium of public and private agencies and non-profits to evaluate the potential of CO2 storage in Cenozoic […]

A pilot study is about to be undertaken by the Pacific Northwest National Laboratory to study the possibility of CO2 sequestration in deep basalt formations throughout the West and Northwest. The study will involve injecting 3,000 to 5,000 tons of liquid CO2 at a depth of between 3,000 and 4,000-ft. The team hopes that mineralization will gradually transform the CO2 and basalt into limestone. The total cost of the pilot study is approximately $10 million and is funded primarily by the U.S. Department of Energy.