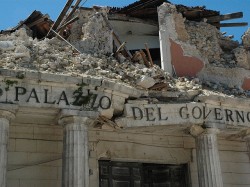 In 2009, an unfortunate earthquake near L’Aquila, Italy caused the death of 309 people. The Italian authorities decided that a group of some six expert geoprofessionals were guilty of manslaughter for failing to predict the earthquake and providing false assurances of safety to the public. Here is John Bachner/The GBA’s take on this incident. [Source: Read more at ASFE: The Geoprofessional Business Association. Image: Flickr]

A deadly magnitude 6.3 earthquake struck Christchurch, New Zealand on February 22, killing at least 147 and with around 200 still missing.  Many buildings have been badly damaged or destroyed and residents also had to deal with large quanities of mud and water which was a result of the liquefaction.  The same region was affected by a 7.1 magnitude quake in September of 2010.  That earthquake was centered deeper and farther from the metropolitan area so there were fewer casualties and less damage.  But many buildings that had recently been repaired, or were even still under repair were devastated once again.  Some early reports were calling this earthquake an aftershock of the September earthquake, but maps I’ve seen (at right) show pretty clearly it was a different fault segment that ruptured during this earthquake.  I have a collection of links below that might be of interest. My heart goes out to the people of New Zealand affected by this disaster.