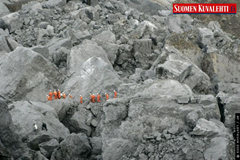 A 12 million cubic meter landslide occurred in Wulong county in southwest China’s Chongqing Municipality on Friday. There are some excellent blog posts on this rockslide at Dave’s Landslide Blog. This massive failure occurred in the vicinity of a mine (Iron ore?) being run by a private company since 2004 after Chinese government geologists labeled the site dangerous resulting in it being closed in 2000 after over 50-years of production. (Photo from Suomen Kuvalehti via Dave’s Landslide Blog)

The City of Pittsburgh Pennsylvania has recently started a nearly $1M landslide remediation project on the City’s north side, but it is only one of nearly 20 landslide sites affecting public rights of way being monitored […]

A couple walking on the beach narrowly missed being crushed by tons of sandstone crumbling from the cliff face. The incident took place in Dorset, UK at a beach that has been known for these […]