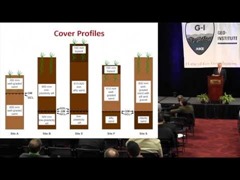 Dr. Craig Benson of the University of Wisconsin delivered the 2012 Peck Lecture at the Geo-Institute’s Geo-Congress in Oakland. The GI just released a video of the lecture on their YouTube Channel. The title of his lecture was “Bentonite Barriers for Geoenvironmental Containment: Lessons Learned from Full-Scale Applications”. You can watch the lecture on the Geo-Institute YouTube channel.

May 6, 2008 rockman Failures Comments Off on Continuing Problems for Ohio Landfill

The Countywide Recycling & Disposal Facilities in Stark County, Ohio have a new round of problems. There has been much debate over an underground fire reportedly caused by the disposal of aluminum dross waste, a byproduct of aluminum production, dumped between 1993 and 2001. The site has long received complaints for odors and for a long time denied that there was a fire. They have also had problems with slope stability, including a failure of a portion of the south slope in 2006, possibly a result of the destabilizing effect of the fire. Early this year the Ohio EPA cited the facility for violating 8 environmental regulations after waste was found to have migrated outside the permited waste area.

Their latest problems involve a tear or leak of a geosynthetic lining that caps the facility to control gas and odors from the underground fires and regular landfill gas. The leak resulted in 500 to 5,000 gallons of leachate spilling into a sediment pond. The material fortunately did not leave the site and was pumped out of the pond and transfered to a treatment plant where their leachate usually goes. The landfill, one of the largest in Ohio, handles about 6,000 tons of trash a day, including about half of Summit County’s residential garbage.

Story by way of Geosynthetica. Image from Long Live the Village Green.

Earthsoft, makers of the EQuIS geotechnical and environmental data management software, have posted a presentation titled ODOT Geotechnical Data Management System given by Kirk Beach of the Ohio Department of Transportation (ODOT) Office of Geotechnical […]