A dramatic retaining wall failure and subsequent landslide last week damaged several cars and shut down a rail line in Baltimore, Maryland. The final failure was caught on video by a bystander. The landslide forced a number of residents to be evacuated from their homes.

May 6, 2009 rockman Geologic Hazards Comments Off on Landslide Mitigation Examples in Japan

A couple of weeks ago the Landslides Under a Microscope blog had two nice posts about Landslide Mitigation examples in Japan. The author references the book “Landslides in Japan” (1996), but I’m not sure if […] 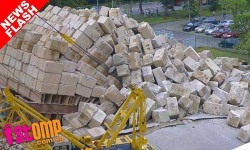 A pile static load test went awry in Singapore when a pyramid of dozens of concrete blocks used for the reaction force toppled over into Gilstead Road. The force of the collapse caused a gas main to rupture but there were no reports of injuries. Click through for the video.

A retaining wall failed along the A13 autobahn in Schonberg, Austria. Few details are available at this point, but the wall did fall onto a passing truck, killing the driver. Snowmelt was likely a factor […]