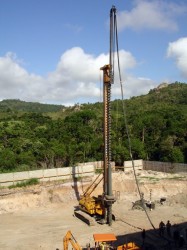 National Driller Magazine has a nice overview article of Continuous-Flight Auger Piles that was featured in their Foundation Drilling Newsletter. It’s a decent overview for those unfamiliar with CFA Piles. This type of deep foundation involves drilling the entire length of hole in one continuous operation, and then pumping concrete or grout down the hollow center of the pile as the auger is withdrawn. [Source: National Driller. Image: Hercules Machine Corporation]

AMS makes samplers ranging from hand augers to sonic drill rigs and direct push rigs for geotechnical and environmental sampling. This video gives an overview of the origins of their company in 1942 and their […]

From the report summary: Although exploratory borings and engineering studies during design are an integral part of foundation engineering, the axial resistance of a driven pile foundation is ultimately determined by the criteria used to […]